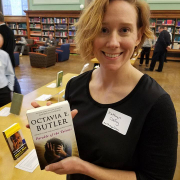 Dr. Kathryn Clancy is an Associate Professor of Anthropology at the University of Illinois. Clancy runs an intersectional feminist biology lab with the goal of understanding how modern environments influence women and gender minority reproductive physiology, health, and well-being. Clancy’s main field sites are the Mogielica Human Ecology Study Site in rural Poland, where she has worked since 2002, and the Girls Adventures in Math, Engineering, and Science (GAMES) summer camp in Urbana, Illinois, a longitudinal research project in its fifth year. Clancy’s critical research on the culture of science has also received national attention. She and her colleagues have revealed the widespread prevalence of sexual harassment and assault in the field sciences, astronomy, and planetary science, as well as the ways in which sexual harassment drives women from their careers. She served on the National Academy of Sciences Committee to Address Sexual Harassment in the Sciences, which released their report in June of 2018. Clancy was named one of Nature’s “10 most influential scientists” in 2013, and received the Gender Equity Award from the American Anthropological Association in 2018. Much of her public intellectual work takes place online, with a popular Twitter feed at @KateClancy, a website and blog at www.kateclancy.com, and Period Podcast, a podcast about women and gender minority health. Clancy is under contract with Princeton University Press for a book on the evolutionary medicine of the menstrual cycle, forthcoming in 2020. She has two wonderful daughters and a roller derby addiction.